Thanks to all the community members who came out tonight to the “Duke Energy Drop-In” on Riverbend coal ash. While I wish Duke had seen fit to attend our community meeting back in March rather than organize a PR event two months later, they did share the welcome news that they are committed to removing the coal ash from the shores of Mountain Island Lake. Woo hoo! 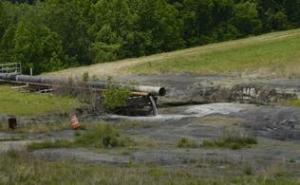 Clearly the Dan River spill, public pressure and threat of legislative action have Duke Energy scrambling to get their coal ash act together. However, they still seem painfully incapable of that oh-so-essential first step to recovery: admitting you have a problem. They are still hell-bent on trying to convince us that coal ash isn’t really bad for us.

Case in point, tonight I had a conversation with one of the Duke employees who informed me that I shouldn’t be worried about arsenic because it’s naturally found in the environment, and heck it’s even in apple juice! (I reminded him that no one wants it in apple juice – it’s not like it’s being added to our kids’  juice boxes as a supplement for crying out loud. Hello?  Seriously, dude, have you not heard of Dr. Oz?)

Yes, Mr. Duke Energy, there is naturally occurring arsenic. It’s just not what’s lurking in those coal ash ponds. Nice try with the weaselly wording. But we aren’t stupid.

"I looked around and thought, why doesn't somebody do something? Then I realized, I'm somebody."

"Never doubt that a small group of thoughtful, committed citizens can change the world. Indeed, it is the only thing that ever has." - Margaret Mead